History of the estate
&
History
of Dwór na Wolicy

The earliest history of Wolica can be traced back to the 14th century. The first mention of Wolica comes from 1325-1327 when it was recorded as one of the villages belonging to the parish of St. Jadwiga. The establishment of a manor house and park in Wolica dates back to the end of the 15th century. The first information about the estate was recorded in the year 1500, when, as a result of the division of property between the hiers of the Gryphites of Dębica, the estate became the property of Jakub, grandson of Jan of Dębica.

Little information about Wolica has survived to modern times. From the surviving list of landowners of the parish church in Dębica from 1681, it appears that, at that time the owner of the village of Wolica was Jan Zborowski with his wife Elżbieta. From the book of land registry, which was established in 1874, it is known that around 1800, Marcin Russocki was the heir of Wolica. Further entries regarding the estate of Wolica show that the next owner was Tadeusz Marynowski, who on July 7, 1843, handed over the estate to Barbara Marynowska. 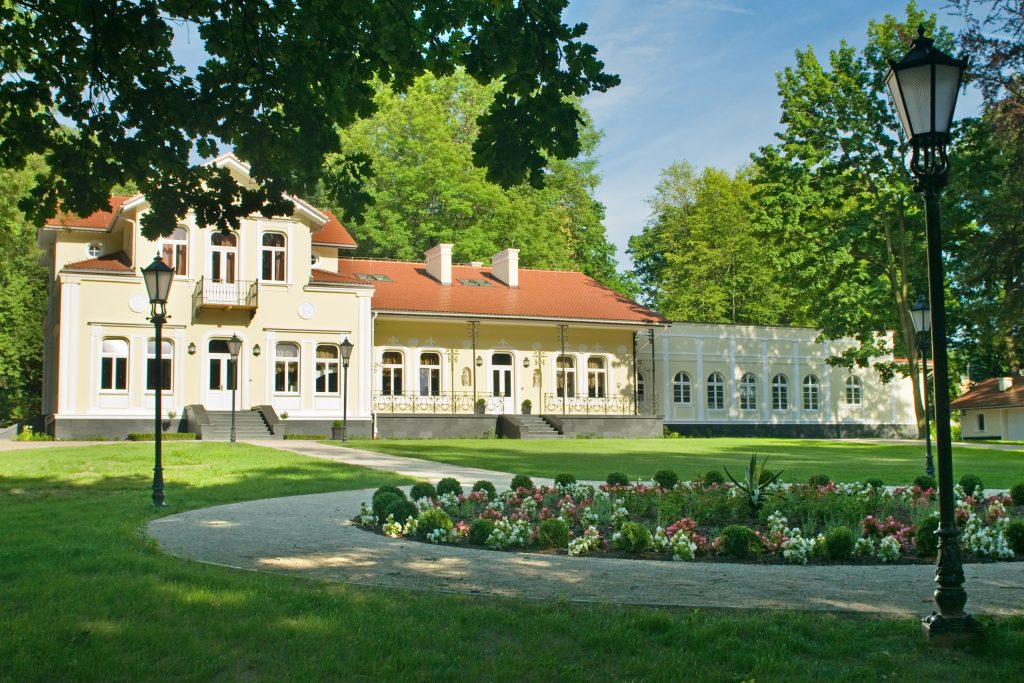 On August 28, 1855, Teodor baron Christiani-Grabieński-Kronauge von Kronwald became the owner of the Wolica estate. He was an Austrian official holding the high position of President of the Higher Court in Krakow. The Christiani family was also the owner of Trzciany and Słotwiny near Rzeszów. On May 14, 1888, Teodor Br. Christiani gave Wolica to his son Henryk, who on July 16, 1891, married the countess Olga Milieska. Henryk baron Christiani-Grabieński-Kronauge von Kronwald in 1890-1892, substantially renovated the estate. The date of the present brick building of the manor house dates from this period. It is here that couple bore three children; Janina (1892), Anna Irena (1894) and Alfred (1896). Before the First World War, the Christiani family left Dębica for Vienna permanently.

The Wolica estate was sold on November 20, 1916 to Władysław Płocki, under the Topór coat of arms. In the second half of the 19th century, Count Płocki had been quite actively interested in the development of the oil industry in the County of Gorlice and held shares in companies in this industry. He also owned a manor complex in Parkosz near Pilzno. The count, who was over 60 years old at this time, married forty-year-old Helena Piętkowska. The marriage was childless and after her husband’s death on March 18, 1929, Helena Płock inherited the estate. After the occupation of Poland by the Russians in 1944, the army took over the estate, which they plundered and destroyed, and the record books were burnt. Countess Płock left Wolica and took a small number of items with her to Krakow, where she lived until her death in 1978.

On July 17, 1946, the estate in Wolica came under state control. Initially, the manor house was the seat of PGR (government farms). Later the manor house with 2.41 ha of parkland was transferred to the health department for use as a Health Spa for Children. In 1963, a sanitorium for children at risk of tuberculosis was housed in the manor house. From 1968 it was home to The State House for Children of the Deeply Handicapped. The remaining part, outside the park, approx. 3 ha, belonged to the PGR Zawada, which was later divided into residential development plots. The manor house and park were in use by the State Social Welfare Home until 2001.

On August 18, 1980, the manor-park complex in Wolica was entered into the registery of monuments under article number A-223 by the Provincial Conservator of Monuments in Tarnów.

On July 21, 2004, by way of a tender organized by the County of Dębica, the manor with the adjoining park of 2.41 ha became the property of Wanda and Kazimierz Mikrut from Dębica. The new owners completely renovated both the manor house and the park, meticulously restoring the exterior, referencing photographs from the 1920s to replicate the house’s former glory. The southeast wing was rebuilt and the interior of the manor house was renovated to reflect its new function as a hotel and restaurant.

On November 17, 2009, the Mikruts transferred the estate to their daughter, Marta Mikrut-Grobelny. In 2014, the construction of a south-western outbuilding was completed, which is to serve as a private residence for the current owners.